Facts show that the Manama Dialogue, in its eighteenth summit held a few days ago, constitutes an explicit cover for widespread violations of human rights and the prevention of internal dialogue.

The opposition Islamic National Accord Society said this summit was held when the country was ravaged by the most significant political and security crisis in its history.

It pointed out that the summit coincided with the authorities’ rejection of all calls by the United Nations and the world for it to engage in dialogue with the Bahraini people, who are paying a heavy price for their demands for democratic transformation, social justice and respect for human rights, a reality that has brought Bahrain to a late economic and development level in the absence of unanimous national consensus and harmony.

It added that while a number of countries and diplomatic, military and security agencies meet in the Manama Dialogue to talk about conflicts and regional security, the language of internal dialogue is prohibited in Bahrain, and repression and silencing mouths are at the forefront.

According to the opposition association, al-Khalifa authorities sought to use the Manama Dialogue to obscure the reality of the political, human rights and security situation and the existence of the country in crisis.

The party pointed out that Bahrain’s prisons hold hundreds of citizens, including opposition leaders and symbols, and several scholars, academics and activists, for reasons related to freedom of opinion and expression and the call for dialogue and democratic transformation.

It urged the countries participating in this conference to ask Bahrain to stop political repression, oppression, marginalization and tyranny and to respond to international decisions and UN recommendations, calling for the need to reproduce power through serious and comprehensive political dialogue, which achieves the building of a just democratic state.

It stressed that the majority of the people attended Bahrain’s peaceful movement as a result of the urgent necessity for comprehensive and severe political reform and that the authorities deliberately obscure the truth, vague the vision, rely on economic interests between the world and the Gulf states, and work to buy off people and positions to turn around and escape from pressing democratic entitlements.

Al-Wefaq confirmed that 92 countries made 245 recommendations in the Human Rights Council a week ago related to the political, legal, constitutional and security realities.

The states demanded the need for political transformation, stopping violations and abuses, blocking freedom of expression and peaceful assembly, and the need to return political societies and the political process in the country. 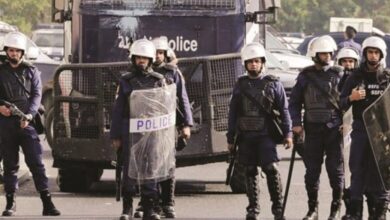