The leader of the Khalifa regime, Hamad bin Issa, violated the demands of international human rights organizations by excluding prisoners of conscience and the opposition leadership from a decree to release detainees on the occasion of Eid al-Fitr.

Hamad bin Issa pardoned and released 160 prisoners convicted in various cases after serving a period of sentences against them without including any prisoners of conscience in the country.

This contrasts with the demands of human rights organizations, including Human Rights Watch, which called on the Khalifa authorities to immediately and unconditionally release political detainees and opposition leaders and includes them on the lists of the royal general amnesty.

Excluding prisoners of conscience and opponents from the royal decree for their release confirms the continuing reality of human rights violations by the Al-Khalifa regime in Bahrain.

Recently, the Bahrain Center for Human Rights issued a human rights document highlighting the reality of stagnation and the lack of signs of change in human rights violations in Bahrain.

The Center emphasized that the human rights situation in Bahrain during 2021 did not improve, and the Khaleefa authorities are still intolerant of opposition and criticism and restrict Bahrainis from exercising fundamental internationally guaranteed rights.

The Center pointed out that the authorities continue to exclude their opponents by systematically closing civic and political spaces and silencing dissenting voices.

All political opposition parties in Bahrain remain banned, and their former members are prohibited from running for parliamentary elections and leadership positions in civil society organizations.

Furthermore, under the new press law, which was referred to the House of Representatives in April 2021 for review, former members of dissolved political parties who are convicted for political reasons are not allowed to own or run media outlets in Bahrain.

Freedom of the press is severely restricted. No independent media is operating within the country. Severe censorship continued on and off the Internet. There were numerous arrests and summonses for questioning during the year connected with the exercise of the rights to freedom of expression, assembly, and association.

The government enacted a new restrictive law to control dissenting voices in Parliament. Decree-Law No. 26 of 2020, adopted in April 2021, limits the number of MPs allowed to participate in Parliament’s public debates and controls how MPs can criticize the government.

There have been reports of the government using advanced technologies to prosecute activists and human rights defenders in gross violation of the right to privacy.

Prison conditions remained poor in light of the outbreak of COVID-19 in Jau Prison twice during the year due to a lack of hygiene and appropriate preventive measures.

The outbreak of the virus sparked condemnation and led to hundreds of rallies and small demonstrations in various regions in Bahrain to demand the release of political prisoners, especially in April and May 2021.

The ill-treatment in prison, particularly the unjustified confiscation of his book, led the prominent human rights defender Dr Abduljalil Al-Singace to go on a hunger strike in July 2021, which continues today. Three prisoners also died in Jau Prison amid allegations of medical negligence.

On the positive side, the government expanded the implementation of the Alternative Penal Code in September 2021. Under this law and a special royal pardon, 395 prisoners were released during the year, including many political prisoners.

The Human Rights Center concluded that the Al-Khalifa regime does not appear to intend to undertake fundamental reform. The human rights situation is stagnating, and there are no signs of drastic changes. 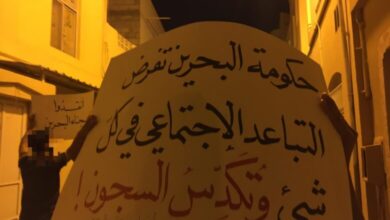