Diplomatic sources said that the European Union is pressing at the highest level on Bahrain to push it to stop human rights violations and activists and address the conditions of prisoners.

The sources revealed that the European Union is heading to use all available means at its disposal to continue dealing with the human rights file in Bahrain, according to the London-based Al-Quds Al-Arabi newspaper.

The newspaper obtained two letters from the European Union regarding Bahrain, one from Josep Borrell, the High Representative of the European Union for Foreign Affairs and Security Policy, and the other from the Brussels administration about the violations recorded in Manama.

Recently, Borrell addressed all members of the European Parliament, who signed the letter dated February 25 2022 on the human rights situation in Bahrain.

The Spanish politician, who served as Minister of Foreign Affairs in the Government of Spain from 2018 to 2019, stressed the importance of promoting and protecting human rights and considered them an essential dimension of the European Union’s engagement with Bahrain.

The senior European official revealed that during his meeting with the Bahraini Foreign Minister last year in Brussels, he raised a number of human rights issues, including the situation of imprisoned activists.

In the letter, Borrell stressed that he had repeatedly raised the cases of Bahraini activists detained in Manama with high-ranking Bahraini interlocutors.

The European official revealed that the European Union held annual dialogues on human rights with Bahrain in his letter.

During the last round on February 22, 2021, the EU raised issues of the right to a fair trial, prison conditions, including inmates’ access to adequate medical care, and allegations of torture and ill-treatment.

Al-Quds Al-Arabi learned that the European Union inquired carefully about individual cases, including the case of Dr Abdul-Jalil Al-Singace and Hassan Mushaima.

The European Union delegation also discussed, during an inspection visit to Bahrain, the cases of Al-Singace and Mushaima, with the Bahraini Police Commander and the Chairman of the Board of Directors of the National Institute for Human Rights, on January 6 and February 13, 2022, respectively.

The European Union stressed, in its address to MPs in Brussels, that it will use all available means at its disposal to continue dealing with the human rights situation in Bahrain. 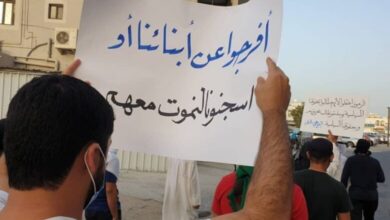