The opposition Al-Wefaq National Islamic Society in Bahrain said it had detected 36 human rights violations against citizens and detainees in the first week of the new year 2022.

The association issued a human rights report in which it stated that “the violations during the mentioned period included arbitrary arrests, ill-treatment of detainees, individual violations in prisons, and denial of treatment.”

The association noted the arrest of Hussein Mahmoud Mahfouz (18 years), from the Al-Markh area, on the first day of the new year.

The Bahraini regime extended the detention of minors:

In its report, the association documented the raids and crackdowns carried out by mercenaries and civilian militias affiliated with the Bahraini Ministry of Interior against peaceful demonstrators during the protest activities, which took place at the beginning of 2022.

A demonstration in Sanabis, west of the capital, Manama, was suppressed with tear gas and tear gas bombs to disperse the participants.

Prominent Bahraini dissident Saeed Al-Shihabi described the Bahraini authorities’ renewal of the arrest of five Bahraini children as another type of Al-Khalifi’sAl-Khalifi’s abuse.

Al-Shehabi tweeted that the renewal of the detention of the Samaheej children for another week, due to the lack of legal grounds for their imprisonment, is “another type of Al-Khalifa abuse.”

“Whoever raises a picture of his son or relative, demanding his release, will be summoned by the torture services” in Bahrain.

Al-Shihabi concluded his tweet by saying, “Their prisons are bustling due to a large number of prisoners.”

It is noteworthy that the Bahraini authorities renewed the detention of five Bahraini children for one week, pending investigation.

The frequency of arrests and torture of children in Bahrain has increased since Crown Prince Salman bin Hamad assumed the position of Prime Minister, succeeding his late uncle Khalifa Al Khalfieh, at the end of 2020.

GIDHR refutes Bahrain's promotion of human rights in the country 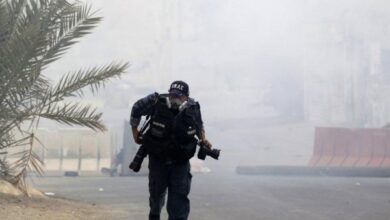