The Bahraini regime punished five children for peaceful demonstrations by extending their arbitrary detention without a legal basis.

Human rights sources told Bahraini Leaks that the Public Prosecution renewed the detention of five children for a week pending an investigation after their arrest during a peaceful demonstration in Sitra.

The Sitra region is witnessing an escalation in peaceful protests to demand an end to the suppression of political and civil rights in Bahrain and solidarity with prisoners of conscience and demand their unconditional release.

Human Rights Watch and the Bahrain Institute for Rights and Democracy had indicated that detained children were beaten, threatened with rape, and electrocuted.

The two organizations explained that these violations occurred with the facilitation of the Public Prosecution and the judges, as the Bahraini Public Prosecution and the Ministry of the Interior refused to attend the children’s parents or lawyers during interrogation, even though their ages ranged between 11 and 17 years, while the judges ordered their arrest unnecessarily – according to the statement.

The Arab Union for the Protection of Childhood has also previously condemned the Bahraini authorities’ arrest and trial of many children and demanded their release.

The Federation stressed that these arrests and trials violate international law and the International Convention on the Child, signed by Bahrain, and criminalize this behaviour.

In this context, Amnesty International condemned the policy of arrests and systematic targeting of children by the Bahraini authorities. It renewed its call on the authorities to respect international covenants and laws related to children’s rights, which it had previously signed.

And last month, the Human Rights Forum revealed shocking human rights documentation of violations against children in Bahrain, which exceeded 655 violations during the last three years.

On International Children’s Day, the Bahrain Forum for Human Rights published statistics showing some of the massive violations committed by the political authorities against children for political reasons from the beginning of 2018 to the end of the sixth month of 2021.

An official from the Bahrain Forum for Human Rights said that during the last year and a half, from January 01, 2020, to June 30, 2021, the number of security calls for children reached (15) cases.

The official referred to the statistics that the forum worked on. According to the figures, the total number of violations practised against children during this period reached 655 violations.

It is noteworthy that young political detainees in Dry Dock Prison are currently on a hunger strike to protest the poor conditions inside the prison, especially the inhumane treatment and health neglect of sick prisoners. 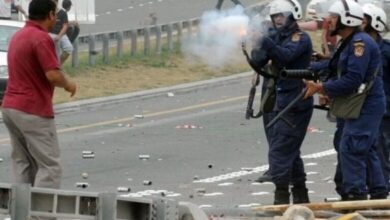