The 12 prisoners were subjected to unfair trials in an independent judiciary, as confirmed by Salam for Democracy and Human Rights.

The organization added that the prisoners’ confessions were extracted under torture, warning that the death sentence could be implemented shortly.

Under Bahraini law, after the Bahraini Court of Cassation upholds the death sentence, the decision is sent to the king, who has the power to ratify or commute the sentence or grant a pardon.

On July 13, 2020, the Court of Cassation upheld the death sentences issued against two torture victims, Muhammad Ramadan and Hussein Musa. They were convicted in an unfair trial in which evidence extracted under torture was used.

After seven years of suspension, the Bahraini authorities resumed death sentences in 2017, to be first implemented against three victims of torture, Ali Al-Singace, Abbas Al-Samih and Sami Mushaima.

These dangerous developments prompted many countries, especially Europeans, to condemn the resolution.

In July 2020, 53 members of the European Parliament sent a letter to the King of Bahrain, asking him to commute the death sentences issued against the 12 citizens.

The letter points to the increasing international pressure on the kingdom to stop torture in the judicial and penal systems.

The head of the Gulf Institute for Democracy and Human Rights, Yahya Al-Hadid, says that Bahrain has adopted various repressive methods to confront the popular movement in the country since 2011, the most horrific of which is the issuance of negative death sentences against opponents.

Al-Hadid said in TV statements that “political executions in Bahrain are a miserable attempt to sow despair and terror in the hearts of those who aspire for freedom, justice and democracy.”

“Those sentenced to death are subjected to constant harassment and violations throughout their detention, the most prominent of which is the psychological torture practised by the jailers against them.”

“the oversight bodies in Bahrain, including the Ombudsman and the National Institution for Human Rights, are neither independent nor effective, and have not held accountable or investigated credible allegations of torture of the five execution victims “Ali Al-Singace, Sami Mushaima, Abbas Al-Sami’, Ali Al-Arab, and Ahmed Al-Malali.”

An online campaign calling for a moratorium on death sentences against prisoners of conscience in Bahrain has received wide interaction.

On Tuesday evening, the campaign was launched to alert world public opinion to pressure Bahrain to stop death sentences against other prisoners of conscience.

Dozens of activists and human rights defenders from Bahrain and Arab countries launched a support campaign for prisoners of conscience sentenced to death under the hashtag #StopExecutionInBahrain. 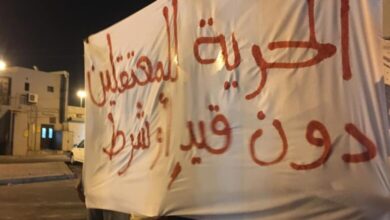