An international classification excluded the Kingdom of Bahrain from the list of the 15 best countries in the world in dealing with the Corona pandemic.

According to Der Spiegel, the list of Arab countries was limited to Qatar only, which came among the 15 countries in the world best in dealing with the pandemic.

The Statistical Center of the Gulf Cooperation Council (GCC) ranked Qatar first in the list of countries most cured of Corona, with 81% of the percentage of confirmed cases.

The Gulf countries combined achieved 72% of the total confirmed cases, compared to the nations of the world, where the recovery rate in some of them reached 50%.

Last month, Bahrain ranked third globally regarding the number of infections and deaths related to the Coronavirus, in light of the confusion of government decisions and its failure to control the epidemic.

According to the New York Times, Bahrain ranked ahead of the most endemic countries in terms of population.

Bahrain, with a population of 1.7 million people, faced, during the past month, a record increase in cases of HIV infection. Some days it reached 3,000 cases. The number of deaths has also increased.

Bahrain turned into a frightening funeral procession, with the burial of the bodies of victims who died due to the Corona epidemic, which revealed the nakedness of the neglected health system in the country.

Observers confirm that the health system has almost collapsed under the secrecy of the authorities, who blame the failures and mistakes of their decisions on the citizens.

Bahraini politicians and activists blamed the regime authorities for the outbreak of the epidemic because of its insistence on continuing travel to and from the affected countries.

Uncertainty and fear have tightened their grip on the Bahraini street, with the new Coronavirus continuing to sweep the country in a large way, despite the authorities’ promotion of their success in reaching a vaccination campaign that ranks first among the nations of the world.

Activists question the validity of the reports published by the Ministry of Health on data related to Corona infections and deaths, and the number of people who received vaccines, their effectiveness and types.

Activists call on the authorities to be more transparent and tell them how the Indian mutant entered Bahrain.

They accused the Bahraini Ministry of Health of evading responsibility for its failure to address the emerging epidemic of Corona and the subsequent arrival of the mutated strain weeks ago in the country.

While the regime’s media promotes that Bahrain represents a “global model” in dealing with the Corona pandemic, on the internal level, it does not stop blaming the citizen and holding him responsible for the noticeable spread of the virus in the country.

On the reasons for the increase in the infection rate, despite 75% of the eligible population receiving one dose of 4 available vaccines, official medical sources claimed that the significant rise in corona infections is due to large gatherings in homes during the month of Ramadan and Eid al-Fitr.

It pointed to the “lack of awareness of citizens and their lack of commitment to preventive measures to limit the spread of the epidemic.” 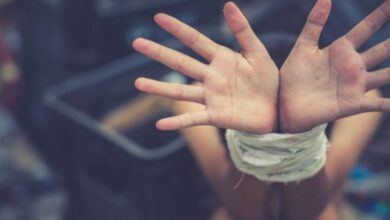