The number of political prisoners who died due to severe torture and medical neglect in Bahrain rose to 49 since 2011.

All of the victims prisoners lost their lives due to brutal torture and the policy of medical negligence practices by the Bahraini regime authorities.

Prisoner Barakat, who was sentenced to life imprisonment, died after his health deteriorated in Salmaniya Hospital in the Bahraini capital, Manama, on Wednesday.

His death came a few weeks after the murder of prisoner Abbas Malallah with a weapon of medical negligence in Jaw Prison on April 6.

As usual, the Ministry of Interior is trying to evade the crimes of killing prisoners by fabricating false accusations against the victims.

The Bahrain Center for Human Rights called for the release of prisoners who have been arrested in connection with issues related to the political and human rights situation in Bahrain since 2011.

It stressed the need to open an impartial and independent investigation into prisoners’ death and hold accountable those who are proven to be involved.

The Bahraini government is facing severe criticism for responding to repeated calls by human rights organizations to release political prisoners.

To reduce the risk of the virus spreading through the prison system in Bahrain.

Human Rights First describes the conditions of prisoners of conscience in Bahrain’s Jaw Prison as “horrific.”

The committee, formerly known as the Lawyers’ Committee for Human Rights, says that the central prison “contains a combustible mixture of the young men who are serving long sentences, many of them have been tortured.”

The prison was built with a capacity of 1,201 prisoners, but the Bahraini authorities have accumulated about 2,700 inmates inside.

Based in New York City and Washington, DC, the human rights organization warned that prisoners are crammed into cells.

They complain that the guards regularly beat them.

Physical and psychological torture has always been systematic inside this prison. It was not surprising that they were subjected to severe repression in 2015 when protests broke out in prison.

The Bahraini Ministry of Interior does not hesitate to invent new brutal torture methods against prisoners of conscience, activists, human rights defenders or any opposition figure.

The inhuman treatment of prisoners consists of depriving them of health care and delaying treatment, especially for prisoners who suffer from acute illnesses that require regular treatment.

The authorities also refrain from performing surgical operations on prisoners and do not provide respirators for detainees suffering from asthma and chest infections.

As for torture and cruel treatment, the authorities used several methods to inflict physical and psychological harm on detainees.

These include placing them in tiny isolation cells for more than 23 hours a day, placing barriers during family visits, beating, ghosting and insulting their sect and belief.

Since the February 14, 2011 revolution, the Al Khalifa regime has committed a long list of bloody crimes against the Bahraini people.

The report issued by Americans for Democracy and Human Rights in Bahrain stated that prisoners of conscience are subjected to torture sessions, some of which lead to permanent injury or death.

The organization warns that torture is the most common violation in the Kingdom, and it frequently uses false testimonies, condemns and punishes “enemies of the state.” 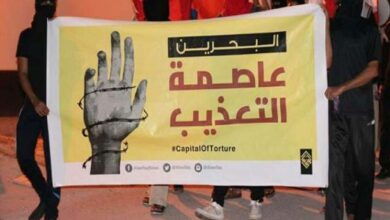 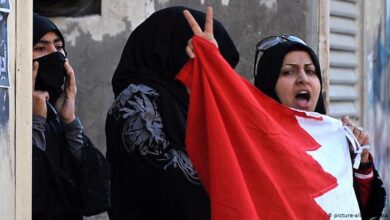