Unidentified persons affiliated with the Bahraini regime’s security services, attacked the headquarters of the Bahrain Society for Resisting Normalization with Israel.

Assailants attacked the association’s headquarters in Manama after a media campaign of incitement against activists rejecting normalization, accusing them of working to encourage citizens to continue protests against normalization.

Activists denounced this attack, describing it as dangerous. They stressed it comes within indirect messages from the Bahraini regime to target all those who reject projects of normalization and rapprochement with Israel.

Political activist Yousef Al-Khaja said that the headquarters of the Bahraini Society: “is being attacked by sick souls and trembling hands.”

This attacking group believes that, by its disgraceful and cowardly act, it can terrorize those who believe in the struggle of the Palestinian people and the supporters of its cause. That’s not going to happen,” said Al-Khaja.

“Zionists in Bahrain attack the headquarters of the Bahrain Society to Resist Normalization with the Zionist Israel,” wrote activist Ahmed Al-Ghasra in a tweet.

The Bahraini regime continues its desperate defense of the culture of coexistence with Israelis ever since it concluded the normalization agreement with the Israeli occupation in the middle of last September.

The King of Bahrain, Hamad bin Isa Al Khalifa, considered his country’s normalization of relations with Israel “a historic achievement that contributes to advancing the peace and stability process in the Middle East.”

This attack comes only a few days after the Bahraini Society to Resist Normalization issued a statement in which it reiterated its adherence to humanitarian and religious constants, considering the Palestinian cause as the central issue of the nation.

The Bahraini Society affirmed that facing the occupation is a duty for everyone to do, for the sake of establishing an independent Palestinian democratic state with Jerusalem as its capital.”

In a statement issued on the occasion of the 45th anniversary of the Palestinian Land Day, the association attacked the Bahraini regime’s haste towards normalization with Israel.

According to the association, this harms Arab national security and inflicts grave harm to the Palestinian people, who are facing the occupation forces with bare chests.

Israel continues its massacres, confiscates lands, and is racing against time to Judaize the city of Jerusalem and expel its people in implementation of the” deal of the century.

In June 2019, Bahrain hosted a workshop on the economic aspect of the Deal of the Century, sponsored by US President Donald Trump.

The Palestinians boycotted that workshop and affirmed their rejection of the entire deal that wipes out their rights to freedom, independence and return.

Israeli settlement operations have doubled, and the West Bank and Jerusalem have over 700,000 settlers coming from all over the world. They were settled in more than 320 settlements on Palestinian land.

Over seventeen Bahraini political societies and civil society institutions confirmed that normalization with Israel does not represent the people of the Kingdom, and will not lead to peace. 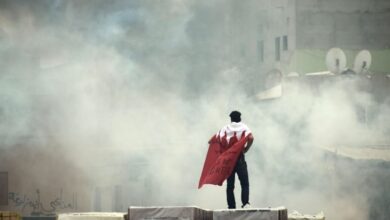