This stand coincided with a series of protest activities that have continued in Bahrain and abroad for days, to put pressure on the Bahraini regime to release prisoners of conscience.

Protesters in France warned of the great danger threatening prisoners of conscience in light of the overcrowding of Bahrain’s prisons. Hundreds of political detainees are behind bars, amid difficult health and living conditions.

Protesters called on the French government to pressure Bahrain to raise its heavy grip on the movements of political activists.

They stressed the necessity of transition to democracy in Bahrain and measures against the authorities, due to human rights violations.

The Bahraini community staged a sit-down in #France a short while ago in solidarity with the political detainees in Bahrain. We call for their immediate release, especially in light of the Coronavirus outbreak in prisons and the infection of a large number of prisoners with it

We join our voice to the voice of our brothers, fathers and families, who demand the release of their children. # Free_Prisoners_Bahrain

A statement issued by these organizations said that Bahrain, since 2011, has carried out large-scale campaigns to suppress dissidents and violate human rights in the country.

According to the statement, the Bahraini authorities issued many harsh and unfair sentences against political opponents. In addition, death sentences were imposed on political activists for their participation in the pro-democracy movement in the country.

The statement called on the Bahraini government to release 12 Bahrainis who were sentenced to death for confessions extracted under torture. It also called on Manama to halt and prohibit all death sentences in the country.

Last week, the US State Department criticized Bahrain’s human rights record, and accused the security authorities of committing various violations. This was stated in the Human Rights Report for the year 2020 issued by the Ministry annually; to shed light on the human rights situation around the world.

According to the report, human rights violations in Bahrain included torture, cruel, inhuman or degrading treatment, and harsh detention conditions, including the lack of adequate medical care in prisons.

Violations also included arbitrary arrest, imprisonment of politicians, arbitrary unlawful interference with privacy, and restrictions on freedom of expression, the press, and the Internet, such as censorship and blocking of websites. 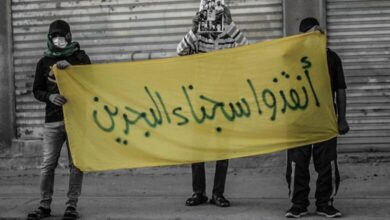