Claims by the Crown Prince and Prime Minister Prince Salman bin Hamad Al Khalifa that the country is over what he called“the events of 2011” have been refused by Bahraini human rights defenders.

“Bahrain has not gone beyond the 2011 crisis, although authorities like to say so, move forward and open a new page,” said human rights activist Yousef Al-Muhafadha.

It is impossible to say that Bahrain is over the protests of 2011, when the authorities continue to keep hundreds of the same protesters behind bars.

After the crackdown, King Hamad ordered an internationally recognized commission made up of experts and scholars headed by the late law professor Sherif Bassiouni, to investigate.

The committee was established by the King of Bahrain on June 29, 2011. It was mandated to look into the incidents that occurred during the period of the protests in February and March 2011 and their implications.

The activists stated that the committee recognized clearly and explicitly that political prisoners in 2011 were tortured and their confessions were invalid. So far these prisoners have not been released.

In Bahrain, there is an existing human rights crisis and many files have not been addressed in the Kingdom since 2011, especially when there are 12 detainees subject to final death sentences.

The activist also referred to political societies, human rights organizations and independent media, which remain closed in the country.

Last week, the February 14 Youth Coalition in Bahrain rejected the Crown Prince’s statements that the country had passed the events of 2011. Bahrain is living in the depths of the revolution that began in 2011, Said Dr. Ibrahim Al-Aradi, Director of the Political Bureau of the February 14 Coalition in Beirut.

The 2011 protests cannot be overridden until the people obtain their full rights, foremost among which is the right to self-determination.

Al-Aradi said that the statements of the Crown Prince show the absence of the strategic vision of the “unelected Caliph Prime Minister, stressing that Bahrain needs comprehensive political, economic, social and development visions.

The Bahraini regime cannot do justice to its citizens or meet their basic needs, and accepting the current situation is only influencing the corrupt dictatorial rule of Al Khalifa.

The Bahraini Crown Prince’s hinting of alternative punishments for prisoners and the establishment of open prisons does not nullify the inherent right of all political prisoners to freedom without restriction or condition, concluded Al-aradi. 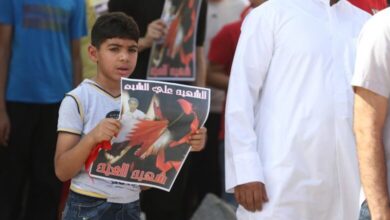